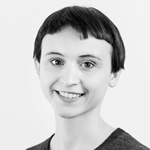 Agnes Norris Keiller is a research economist at the Institute for Fiscal Studies and works in the Income, Work and Welfare sector. She currently works on projects related to the income distribution and the labour market.

Here she examines the changes to the tax credits system which are being introduced this month, and what the changes might mean for those receiving them in the future

The first week of April saw the introduction of significant cuts to the working-age benefits system.

The allocation of tax credits (and universal credit, which is replacing tax credits and three other working-age means-tested benefits) currently depends on the number of children in a family. First-born children increase maximum entitlement by £3,325 per year (including the so-called ‘family element’ of £545), while subsequent children each increase maximum entitlement by £2,780 per year. From 6 April, however, new-born first children will no longer receive the ‘family element’ top-up, while third and subsequent children born on or after that date will no longer qualify for any tax credits or universal credit. The scope of the policy will widen from November 2018, when the new rules on third and subsequent children will also be applied to anyone who makes a new claim to universal credit, regardless of when their children were born. 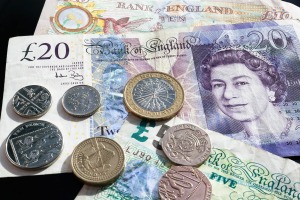 What this means for claimants

The restriction to new births and new claims means existing claimants will not see their benefit income fall, but it entails substantial cuts in future support for larger families. About £3 billion of the £5 billion in estimated savings is expected to come through limiting support to two children, while the remaining £2 billion comes from removing the £545 ‘family element’ – currently received by around four million families. Eventually the reform will mean three-child families get around £2,500 a year on average less than they would have got, while families with four or more children get £7,000 a year less on average. There are currently around 900,000 families with three or more children on tax credits and, while these families will not see any cuts to their benefits, this number gives an indication of how many families may eventually be affected by the large reductions in support. 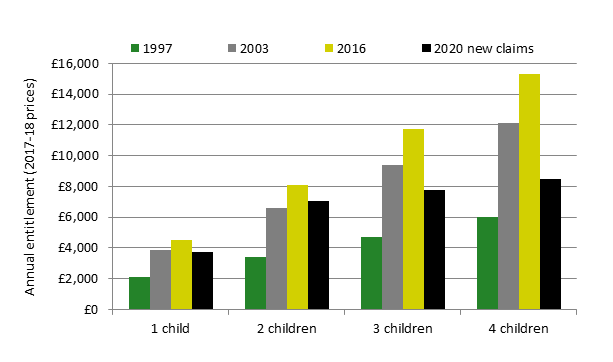 The bar chart puts these cuts in their historical context, showing how maximum child-related benefit entitlements for families with different numbers of children have evolved (‘maximum’ here means the amount payable if income and assets are low enough for entitlement not to be reduced by the means test). It shows support for new claimants with three or more children will be much less generous in real terms in 2020 than when tax credits in their current form were introduced in 2003. However, real-terms entitlement will still be higher for such families than it was when New Labour came to office in 1997.

Reducing means-tested benefits for families with children will tend to strengthen the financial work incentives of the parents – who will have less support to lose by increasing their earnings – and this could lead to increased employment rates. On the other hand, the decision to reduce support for new claimants from November 2018 could actually create strong disincentives to work in some cases. For example, a parent on tax credits offered a one-year fixed term contract after November 2017 would want to take into account that, if they lost tax credit eligibility for that year and then became eligible again after that, they would be treated under the much less generous rules. 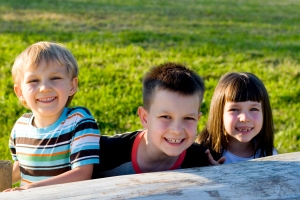 As well as affecting work incentives, the government has stated (PDF) it hopes to affect the decisions low-income families make about how many children to have. There is some evidence that the timing of births in the UK has been affected by past changes to the generosity of benefits, but no conclusive evidence on whether such changes affect the number of children families choose to have. The government also argues (PDF) that making low-income families face more of the costs of choosing to have additional children improves the fairness of the system. But for both of these aims, it is unclear why the new rules will also apply to new claimants with dependent children of any age from the end of next year. Although widening the scope of the policy in this way will bring some of the long-run savings forward into the end of this parliament, it also hits families who made the decision to have a child before the new regime was in place.

3 thoughts on “Tax credit cuts: the impact on families”